The Great Firewall of China: From the Inside

As many of you know, I’m spending the next few months in China studying on a University of Chicago program hosted at Renmin University, right near the high-tech district in Beijing. One thing that I’ve been getting up close and personal with is the Great Firewall of China, which has been fun. I’m staying in the international dorm at Renmin - in this post, I’ll run down the available connections to a student at Renmin, access to things outside the Great Firewall, and show, with data, why always being outside the great firewall (typically via VPN) is untenable for an average user. The tl:dr version, however, is that connections outside the Great Firewall are far, far slower than connections inside, providing an incentive to use Chinese products.

First, one needs to realize what the options to be connected to the web for an average University student. In the Renmin dorm, it took 2 weeks to get it up and running, but there are three different types of connections. The first is the official Renmin WiFi network, which is often down and frequently not available in any particular spot in the dorm. The next is ‘CMCC’, or the China Mobile paid network (I got a connection through Boingo for 12$/month). This connection is far more reliable but is also paid. (CMCC is similar to other paid networks in the US such as Boingo or AT&T networks available in Airports and other public spaces). Finally, many students (based on the number of visible WiFi networks in range of my room) choose to purchase a WiFi router and set it up as a bridge from the ethernet ports available in the room. It doesn’t hurt that you can purchase a WiFi router for around 80-100 rmb (14-18 USD) at the nearby electronics marketplace. So, how do these three option compare on speed? (All measurements taken from the same server in Beijing based on ping from Speedtest.net). Testing was done between 10pm and 11pm China Standard Time on April 14th, 2014. 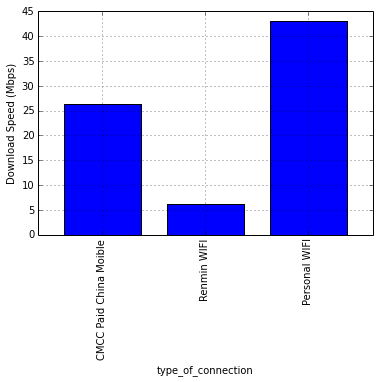 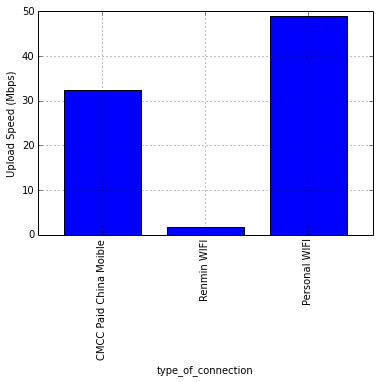 The larger the number, the faster the internet connection

As you can see, the campus wifi is far slower than either of the paid options. However, students do get connection speeds that are capable of streaming, if they are not relying on the campus wifi. Yet, what starts to happen when you connect to a VPN in America?

I tested three different VPNs. The first, the University of Chicago’s cVPN is a Cisco VPN running in Chicago. The next is a openVPN VPN configured on a DigitalOcean instance in the New York datacenter with 2 GB of memory (default settings). Finally, I tested a IPVanish VPN exited on the Chicago-2 node. 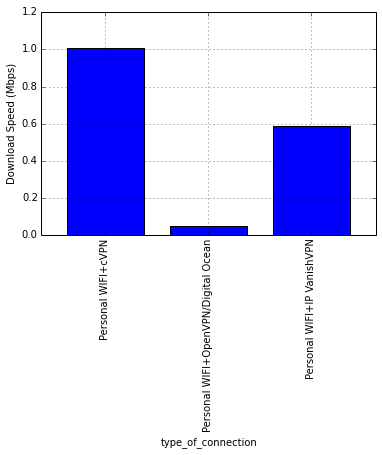 As you can see, the VPN speed are anywhere from 5 to 40 times slower than the Great Firewall connections. And this is running on the fastest internet connection, which required setting up a WiFi bridge. What really kills you, however, in using Twitter, Facebook, Netflix, etc on a day to day basis is ping.

Ya, it’s that bad. Essentially, there is not incentive to use any American service because it will be exponentially slower and will cost you. (DigitalOcean setup costs 20$/month, IPVanish 10$/month). Considering WeChat, QQ, and other Chinese services work as well if not better than their American counterparts, it is easy to see why there is very little demand to jump over the firewall.

Addendum: Not to mention that this requires even more work to get up and running on mobile, which is even more important to most Chinese users based on cursory glaces and conversations.

All code (to generate charts) and data is available.